Using the technology of the double coil outlined on the “Machine Construction” page we have developed a simple device that we think will combat the harmful effects of high frequency radiation used by devices such as WiFi and Mobile Phones.  These transmissions lie in the microwave region of the electromagnetic spectrum and a growing body of scientific evidence suggests that they may be responsible for a number of ailments.  These include tiredness and fatigue, poor quality sleep, irritability, headaches, feeling of pressure in the head, speech and thinking disturbances, brain fog, dizziness, tinnitus, vertigo, tinglings and odd sensations in the limbs, joint pains, heart palpitations, rashes and many more.

Not everybody seems to be sensitive, but those that are can suffer really badly.  Even though some countries have restricted the use of WiFi in schools and certain companies have reverted to hard wiring computers, most of us are constantly bombarded with these potentially damaging radiations.  This technology is here to stay:  too much money is invested in it and most people would be “lost” without it.   A number of scientific papers point out that children are the most susceptible and should not have mobile phones until well into adolescence.  This is due to the thinness of their craniums, which offer very little protection for their brains.

Although legislation could be brought in to reduce the exposure that we all receive, practically it is unlikely to make much real difference.  Therefore, the only hope is that we can create some form of “protective field” which will address and alleviate the negative side effects.

We have tested the double coil technology and we can easily demonstrate that it can be used to create an enormous resonance field the size of a house.   By using sound we can also show that a layer of “smog” seems to be removed from music both acoustic and electronic.  We suspect that we are dealing with a resonance as it takes a number of seconds to reach its maximum effect but dies immediately it is turned off. We have found that the machine is more effective when the double coil is horizontal (see photo).

To make the device simply connect a double coil (see Machine Construction page) directly to an aerial designed to pick up the frequency you want protection from.  So for WiFi you will need a router antenna (most are constructed for 2.4 GHz).  For mobile phones, aerials are readily obtainable for 3G transmissions.  For maximum effect the aerial should be as close as possible to the source, so for WiFi next to the Hub and for mobiles, the phone itself.  The device requires no power source as it is self energizing, so another approach is to carry it with you.

At this stage we can make no therapeutic claims but ask anybody who is interested (whether a sufferer or not) to help us with this important research.  The easiest way to assess the effectiveness of the device is to monitor energy levels and sleeping patterns.  Please feed back any findings positive or negative by using the contact page.  We really appreciate any help that you can give us to combat this potentially damaging radiation.

Since discovering the double coil technology we have continued to research ways of improving the therapeutic devices. We realized that the coils formed a double Helix identical to DNA.

When winding coils there is alway a choice of left-handed or right-handed so it occurred to us that we might use both simultaneously. In other words construct a right handed double coil that mirrors a left handed double coil. These are then wired in series so exactly the same current flows through both coils. The coils are arranged along a common axis. (see photo) 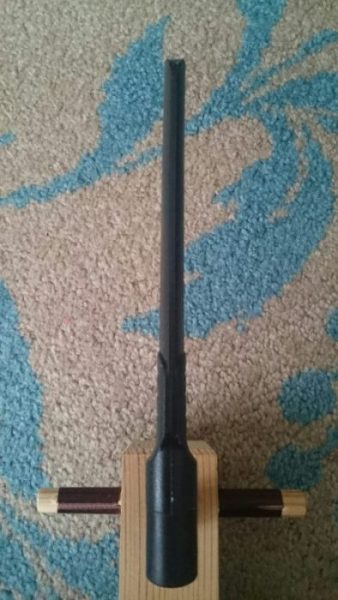 In order to test the coils we use a source of music; an acoustic guitar works brilliantly for this purpose. Alternatively a good hifi system and a well recorded track that contains a small number of instruments could be used. By listening to the instrument/track with the machine first on then off we can establish whether the system is working. The energy field seems to take time to build (approximately 30 seconds) so it is better to start with the machine on, then switch it off; the field disappears immediately.

The effect when listening to sound is more pronounced than when using just one double coil. We have concluded that the effect occurs as a result of cancelling 2 identical electromagnetic waves. As a result a mysterious Energy field seems to emerge from the nothing! With the new development we are simply creating 2 fields, one from right-handed coils and the other from left-handed coils.

As we can definitely detect a difference when listening to sound we suggest that this approach may be more effective when used in therapeutic machines. The only way is to experiment and collect data.

As yet this can only be subjective and anecdotal as we have no way of measuring the Energy directly. However, this should not be seen as a problem. We are told that 95% of the Universe is composed of dark energy and dark matter none of which has never been detected!

We are constantly being polluted by 3 electromagnetic sources:

We therefore set about constructing a machine to address all of these issues simultaneously. It is comprised of 3 separate sets of double coils. We decided to used the new improved left-handed and right-handed mirrored approach. (see photo)

The longer antenna addresses the mobile phone signals, the shorter antenna addresses Wifi and the guitar pick up the magnetic fields generated by mains electricity. Switches have been added to make it easier to carry out experiments to compare the different effects.

Our research has taken us from the original double coil to the use of mirrored pairs and multiple frequency machines. The obvious next step was to create a 3D set up using 3 sets of pairs. Each pair lies along a common axis and the 3 axes are constructed at right angles to each other (see photo).

Again it is important that only one source of energy is used to drive the system. We first wired each of the mirrored pairs in series and then connected the 3 sets of pair again in series. This is quite tricky so we would suggest colour coding each wire.

The remaining 2 wires we extended and terminated with 4mm banana plugs (again see photo). This should be done so that the fine resistance wire is not put under any stress as it will easily break. 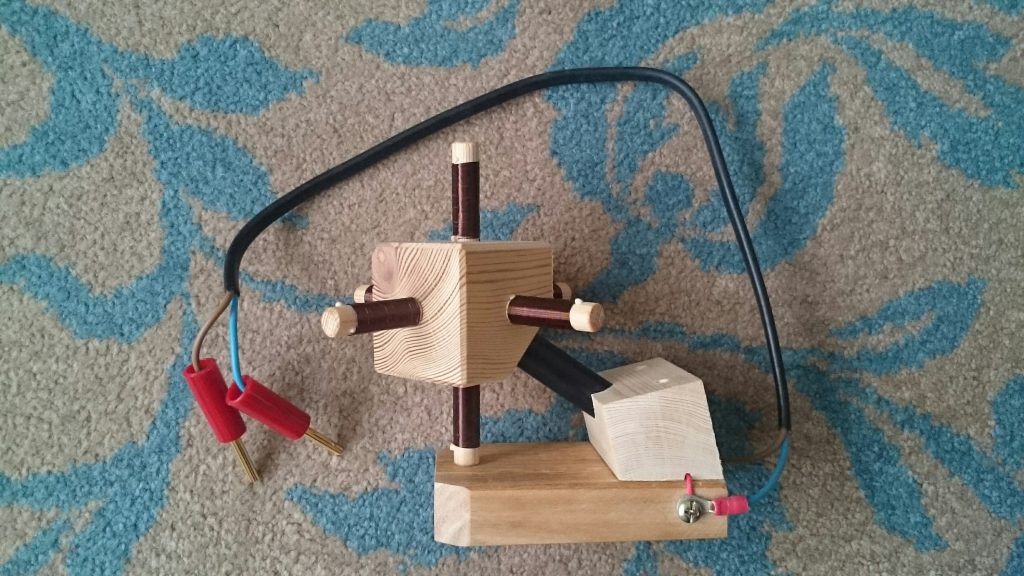 We next contemplated how we might use the new machine and it occurred to us that maybe we could simply connect it directly to a human being. The understanding being that we constantly produce small emfs of the order of mV all over our bodies. Doctors place electrodes on the head of a patient to monitor brain wave functions. So, using the same approach we considered the idea of using;

We have tested the system while listening to music and again can detect a palpable effect. Intuitively, we think that the device might address imbalances in the body. We are therefore conducting research to observe a patient’s emotional and mental states.

We are keen to see if connecting people to the machine brings about a feeling of well being, peace and harmony etc.

A guitarist has reported that when he uses the machine the sound of his instrument is much sweeter particularly with the higher notes. He uses the method of attachment via his feet.

N.B. When purchasing an Antenna check the Connector has the correct centre pin configuration.